Another narrow range Weekly bar was printed, with consolidation and shortening of the thrust. Yet, a new all time High. Still it is a clear strong bullish momentum, and this is the 7th consecutive week to penetrate the upper Weekly Bollinger band.

The market is approaching the upper Bollinger band on the Quarterly and the Semiannual timeframes. If it does so by the last 4 trading days remained for those high timeframe bars to close, it is an important indication as for the strength of the market on these timeframes. If it doesn’t do so, then it might point that the next thrust up can be the last major thrust for this wave (though in the right scale), and most chances that the current bullish wave since the beginning of 2016 is wave 5 of the whole bullish market since 2009.

The closest important target for the current momentum is the Quarterly pinbar of the first Quarter 2016, pointing at 20020, very near to the Quarterly upper Bollinger band. Above that, The next important target is the election week’s Weekly Spring’s target at 20230, quite close to the 20218 level which is the 161.8% extension of the Whole retracement of the last 2 years (what is considered to be corrective wave 4 of the bullish market since year 2009).

Other longer targets are the last November Monthly spring, target at 21000, and the 2015 Yearly bullish pinbar on sloping 8 EMA, aiming for the 21300 area.

It is recommended to take advantage of every bearish move on the Daily timeframe to look for signs of strength leading to bullish setups right where the market should have revealed weakness. 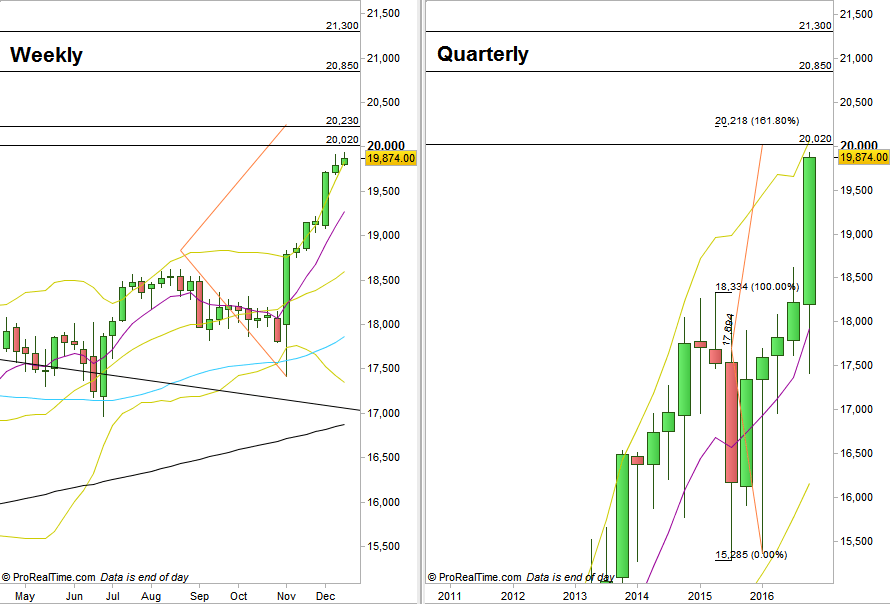 Dow Futures, Weekly and Quarterly charts (at the courtesy of prorealtime.com)